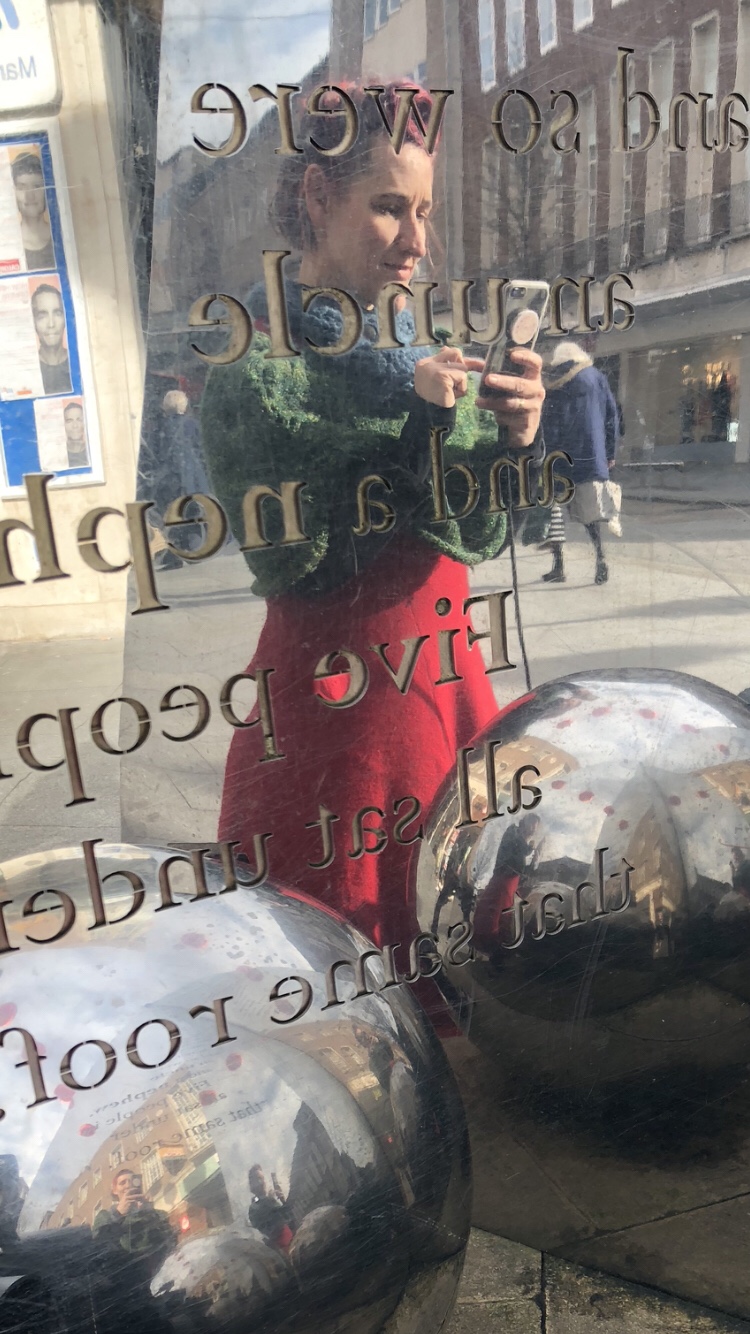 It was really quiet in town today.  I had no real plan about where I wanted to play except I didn’t want to play the same pitches I played last week and the the most of the other pitches were in the shade. It’s been a long cold winter and on such a lovey sunny day I couldn’t bring myself to play in the shade.

I’ve seen other buskers playing by the poetry pyramid in town, it can knock out a few of the other nearby pitches but there were no other buskers in town. It was bathed in beautiful early spring sunshine and I thought I’d give it a go. I’m usually the first in town as I come straight in from the school drop off and often I’m finishing more or less as others arrive so I figured it would be ok.

It felt strange to be standing in this new spot; I FaceTimed my husband who was playing Newton Abbot and showed him the various Vistas. He’s been busking for over 3o years and is a bit of hero wherever he plays so I trust his experience.  I went and got a coffee and played facing up the high street.

It was wonderful playing with the sun of my face. When I start playing I always wonder if I’ll make any money at all but you can’t think like that.  That’s one of the (many) things I love about busking; no one has to give you anything. Some people were sitting waiting for their bus they were clearly enjoying it.  Some people gave some pennies, some didn’t. It’s not about that. It can’t be about that.  You stop enjoying it, half an eye on the case, not fully inhabiting the songs; It feels horrible. So I don’t look in the case, I always say thank you, I live in the song that I’m singing. Even better today was that my  hands weren’t cold, my fingers didn’t hurt, I was without that distraction so I could just sing and play. I really enjoyed myself.

Towards the end of my set I saw Stripey and later Jamie come in to town.  It put me off my stride a little as I wondered if I was raining on their parade, like I said, it can knock out a couple of pitches and I don’t want to make things difficult. However we’er on pretty good terms I think they didn’t come over so I figured they found somewhere and anyway I knew I would be leaving town shortly to get ready for the pick up.

I finished with Should I Stay Or Should I Go… It makes me smile. I packed up and the street was as if I had never been there. I like that

View all posts by louisehartcom